ABSTRACT
Gastro esophageal reflux disease is also known as GERD. It is a long term condition where stomach contents come back up into the esophagus. Resulting in either symptoms or complications. Symptoms include the taste of acid in the back of the mouth, heartburn, bad breath, chest pain, vomiting, breathing problems and wearing away of the teeth complications includes oesophagitis, esophageal strictures and Barrett’s esophagus. Recent studies have demonstrated that peripheral and central factors are pivotal for the emergence of symptoms after gastroesphageal reflux had occurs supporting the view the GERD is a sensory -motor disorder rather than motor disorder alone. The primary pathophysiologic event in GERD is the movement of acid, pepsin and other injurious substance from the stomach in to the esophagus. GERD is a common problem world-wide, the frequency and severity of GERD and severity of GERD and its complications such as burette’s esophagus and geographic variations. most studies from India suggests that these might be less in the Indian population on the other hand studies in a multiethnic population showed that people of Indian origin are at higher risk of GERD than ethnic Malay of Chinese.

INTRODUCTION
Gastro esophageal reflux disease (GERD) is a long term condition where stomach contents come back up into the esophagus. Resulting in either symptoms or complications. symptoms include the taste of acid in the back of the mouth, heartburn, bad breath ,chest pain ,vomiting , breathing problems and wearing away of the teeth complications includes oesophagitis , oesophageal strictures and Barrett ‘s esophagus.( niddk.nih.gov, Kahrilas ,2008)

GERD occurs several times daily in healthy infants, children and adults (Nelson,1998; Vandenplas 2009).Gastro esophageal reflux disease in infants ,children is described as GER . GER causes some symptoms and /or complications (Vandenplas 2009, Sherman,2009).On the basis of a large claim database that uses international classification of(ICD-9) disease ,ninth revision codes. GERD was diagnosed in 12.3% of north  American infants and in 1% of other pediatric age groups .Symptoms of GERD are often nonspecific and may vary widely from regurgitation to excessive crying and respiratory symptoms.GER has the potential to cause severe complications such as oesophagitis and failure to thrive GERD can also have a major effect on the daily life of caregivers and on health care costs ,which have been estimated to be US dollars 2386 per 6 months (Sherman,2009).Although taking medical history and performing a physical examination will often suffice ,pH monitoring ,occasionally combined with intraluminal impedance monitoring pH-mu and/or endoscopy ,can be conducted if necessary. pH-mu is able to detect non-acidic reflux events as well and is of additional value in infants because of feed buffering(van wijk 2009, Loots 2009)

The pathophysiology of gastro esophageal reflux disease has evolved in the last decade primarily by recognizing the multitude of factors that contribute to the emergence of the disorder. These factors may overlap in some patients and differ in others. GERD is primarily considered a motility disorder because dysfunction of the anti reflux barrier is still considered as a prerequisite for the development of the disease. However recent investigation into symptom generation in GERD disclosed the important role of altered esophageal sensation. Recent studies have demonstrated that peripheral and central factors are pivotal for the emergence of symptoms after gastroesphageal reflux had occurs supporting the view the GERD is a sensory -motor disorder rather than motor disorder alone. The primary pathophysiologic event in GERD is the movement of acid, pepsin and other injurious substance from the stomach in to the esophagus. This event also occurs as part of normal physiology but results in GERD when symptoms or tissue damage occurs. Oesophageal mucosal injury in GERD results when mucosal defensive factor are over whelmed by refluxate, occurring secondary to compromised anti reflux barriers decreased effective esophageal acid clearance abnormal mucosal defensive factor and so on.( R. Fass,2006)

GERD is a common problem world-wide[34, Chang 1997) the frequency and severity of GERD and severity of GERD and it’s complications such as burett’s esophagus and geographic variations (Terano 2003). most studies from India suggests that these might be less in the Indian population (Ho KY kang ,1998; Paranjape 1996) on the other hand studies in a multiethnic population showed that people of Indian origin are at higher risk of GERD than ethnic Malay of Chinese(Terano 2003).The high prevalence of H.pylori infection which is known to protect from severe GERD in the Indian population(Paranjape 1996; Chourasia,2011).The role of dietary and genetic factors is not clear.

EPIDEMIOLOGY
In this update to the 2005 review of GERD epidemiology we have identified 15 population based studies published since the original literature search that assesses  the prevalence of GERD. Only one study of GERD incidence published since the original review was identified which reported incidence in pediatric patients age 1-17 years in the U.K from 2000-2005.(Ruigomez A,2010) This study by regimes it all used the health improvements  network,a large primary care database containing anonymised information on approximately 2.3 millions patients currently registered with participating  primary care practitioners (pcps)(approximately 4 x of the total U.K. population) included patients were required to be aged 1-17 years ,to have been registered with their pcp for at least 1 years before the start of the study period and to have no diagnosis of GERD prior to a first diagnosis in the period 2000-2005.the overall incidence was 0.84 per 1000 person –year (kotzan J , 2001 ; Ruigomez A,2004) in comparison, two studies of GERD  incidence in either adult patients or the adult and pediatric population considered together and found the incidence of GERD to be approximately 5 per 1000 person -years.the incidence of GERD in children over 1year of age may therefore be considering lower than that in the adults population. It should be noted that the study of kotzan et al from the USA used data from a medical said claim database and is therefore only representative of the low income population who receive Medicaid.( Spenchler SJ ,1992)

Prevalence of GERD in Australia is about 672 individual who are residents of western Sydney. It   occurs in all age groups and mortality associated with GERD is rare. GERD clinical presentation have great impact on quality of life than comparative with duodenal ulcers, angina, untreated  hypertension, menopause. Approximately 44% of American population suffer with symptoms of GERD monthly. As its prevalence varies due to geographic location but occurs mostly in western countries. Additionally the risk of esophageal adenocarcinoma is 20-30 times higher in patients with barett’s esophagus who experience heart burn than normal population. (Dimenas E ,1993). 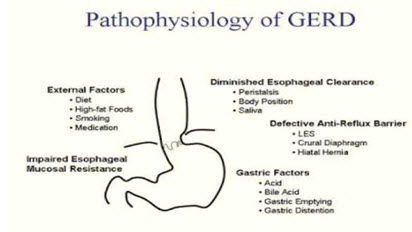 PATHOPHYSIOLOGY
The key factor in development of GERD is retrograde movement of acid or other noxious substances from the stomach in to the esophagus. In some cases, gastro esophageal reflux is associated with lower esophageal sphincter pressure related to Spontaneous transient LES relations which increase in intra abdominal pressure (https://www.bluecrossnc.com ).An atonic LES all of which may lead to the development of gastro esophageal reflux. Problems with other normal mucosal defensive mechanisms such as anatomic factors,( Callum ,1990)
• Esophageal clearance
• Mucosal resistance
• Gastric emptying
• Epidermal growth factor
• Salivary buffering may also contribute to the development of GERD.( https://www.tuftsmedicalcenter.org )
• Aggressive factors that may promote esophageal damage upon reflux into the esophagus include gastric acid, pepsin, bileacids, and pancreatic enzymes. Thus the composition and volume of reflux as well as duration of exposure are the most important aggressive factors in determining the sequence of reflux.( Lagergren J ,1993)
• Several complications may occur with GER including esophagitis; esophageal strictures and Barrett esophagus, adenocarcinoma of esophagus. Strictures are common in the distal esophagus and are generally 1-2 cm in length.( Lagergren J ,1993; Fennestry,1996)
• The use of NSAIDS or aspirin has been implicated as an additional risk factor that may contribute to the development or worsening of esophageal strictures.
• Although GERD may lead to esophageal bleeding, the blood loss is usually chronic and low grade in nature but can lead to anemia.( Kuruger KJ ,1996; Kiljander TO ,1999)
• In some patients the repairs process lead to displacement of sqaumous epithelial lining of the esophagus by specialized columnar type epithelium.( Simpgon WG ,1995)This condition known as Barrett’s esophagus is more likely to occur in those patients with a long history of symptomatic mechanisms by which defective LES pressure may cause gastroesophgeal reflux are threefold and probably most importantly reflux may occur following spontaneous train scent LES relaxation that are not associated with swallowing (Lambert R ,1997). Although the exact mechanism is modifications and patients directed therapy and pharmacological therapy.

DIAGNOSIS (mayoclinic.org/diseases-conditions/gerd/diagnosis)
• Upper endoscopy: Your doctor inserts a thin, flexible tube equipped with a light and camera (endoscope) down your throat, to examine the inside of your esophagus and stomach. Test results can often be normal when reflux is present, but an endoscopy may detect inflammation of the esophagus (esophagitis) or other complications. An endoscopy can also be used to collect a sample of tissue (biopsy) to be tested complications such as barrette’s  esophagus
• Ambulatory acid (pH) probe test: A monitor is placed in your esophagus to identify when, and for how long, stomach acid regurgitates there. The monitor connects to a small computer that you wear around your waist or with a strap over your shoulder. The monitor might be a thin, flexible tube (catheter) that’s threaded through your nose into your esophagus, or a clip that’s placed in your esophagus during an endoscopy and that gets passed into your stool after about two days.
• Esophageal manometry: This test measures the rhythmic muscle contractions in your esophagus when you swallow. Esophageal manometry also measures the coordination and force exerted by the muscles of your esophagus.
• X-ray of your upper digestive system. X-rays are taken after you drink a chalky liquid that coats and fills the inside lining of your digestive tract. The coating allows your doctor to see a silhouette of your esophagus, stomach and upper intestine. You may also be asked to swallow a barium pill that can help diagnose a narrowing of the esophagus that may interfere with swallowing.

Dietary and lifestyle modifications and education about factors that may worsen GERD symptoms should be discussed with the patient (Devault KR, 1999). Many of the life changes that are included in phase 1 therapy (Kitchin LI ,1991; Richter JE ,1981) . Although  most patients do not  respond to lifestyle changes alone, the importance of maintaining these lifestyle changes throughout the course of GERD therapy should be stressed to the patient on a routine basis ,no matter what other therapeutic modality is used  patients with mild or infrequent symptoms may see improvement with the inexpensive nonprescription H2 –receptor antagonists ,antacids ,or alginic acid.

Non Pharmacologic Therapy: ( Dianne B,2005)
Non pharmacologic treatment include lifestyle modifications ,which should  the started initially and continued throughout the treatment course for GERD ,and interventional approaches [Antireflux sugery or endoluminal therapies]

Lifestyle Modifications: The most common lifestyle changes that a patient should be educated about include
a) weight loss
b) elevation of the head of the bed;
c) eating smaller meals and avoidance of eating 3 hours prior to sleeping
d)  avoidance of foods or medications that exacerbate GERD;
e) smoking cessation ;and
f) avoidance of alcohol .obese patients were 2.8 times more likely to experience GERD symptoms than patients who were not obese .
• A meal high in fat will decrease LES pressure for 2 hours or more postprandially .in contrast ,a high- protein, low –fat meal will elevate LES pressure .
• Elevating the head of the bed about 6 to 8 inches with a foam wedge under the mattress (not just elevating the head with pillows ) decreases nocturnal esophageal acid contact time and should be recommended .
• Fats and chocolate can decreases LES pressure, while citrus juice, tomato juice, coffee, and pepper may irritate damaged endothelium.
• Medications such as anticholinergic, barbiturates, calcium channel blockers, and theophylline decrease LES pressure.

NOW YOU CAN ALSO PUBLISH YOUR ARTICLE ONLINE.

FIND OUT MORE ARTICLES AT OUR DATABASE

GENERIC VERSUS BRANDED MEDICINES AVAILABLE…
THE KNOWLEDGE, AWARENESS, ATTITUDE AND…
EXTRACTION AND CHEMICAL TESTS ON…
MUNTINGIA CALABURA (JAMAICA CHERRY )…
UPDATES ON THE AMENDMENTS MADE…
AN INCISIVE REVIEW OF NANOSENSORS
OBSESSIVE COMPULSIVE DISORDER AND ITS…
SOME NATURAL ISOLATED COMPOUNDS AS…
MANAGING RATIONAL USE OF DRUGS…
A REVIEW ON ANALYTICAL METHODS…