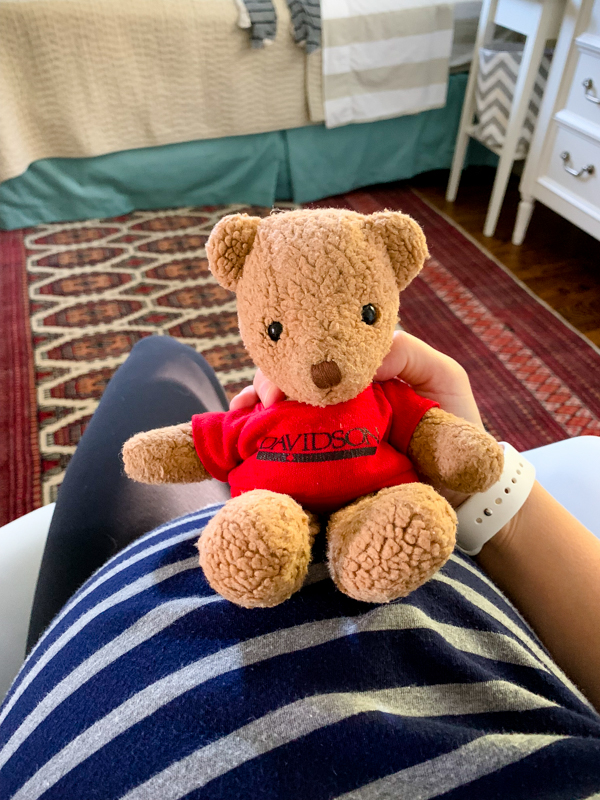 Happy due date to us! Over the weekend I relaxed a little more. It’s weird – the closer I’ve gotten to my due date (and maybe beyond) the more calm I feel about possibly going into labor. It’s not something I would have predicted! Maybe because if the baby decides to come now it won’t be as big of a surprise as if he came early?

What’s funny is I went to read my 40 week update with Mazen and had the exact same emotions! In fact, I have all the same symptoms too. I shouldn’t be so surprised that this pregnancy has been so similar to my first – I’m in the same body. But for some reason I think it’s hilarious to read myself writing the same things I am currently thinking. It’s like I have a twin and she has already put into words how I’m feeling! I think the only difference the second time around is a drastic increase in Braxton-Hicks and a bit more progress on the dilation/effacement front. I am even at the exact same weight that I was when I delivered Mazen. I am now very much expecting to have my water break a week late. It just makes sense this sequel will end the same. 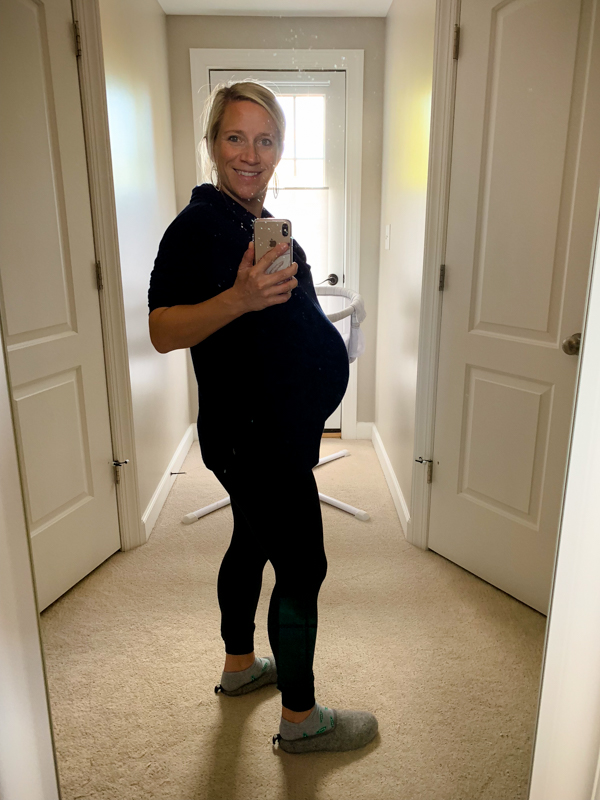 On Friday I went to Mazen’s school to watch him participate in the Walk-A-Thon fundraiser they put on. He was a bit negative about it leading up to the event saying he wasn’t going to participate, but once there, with all his friends around him, he took off running! It was so cute to watch. 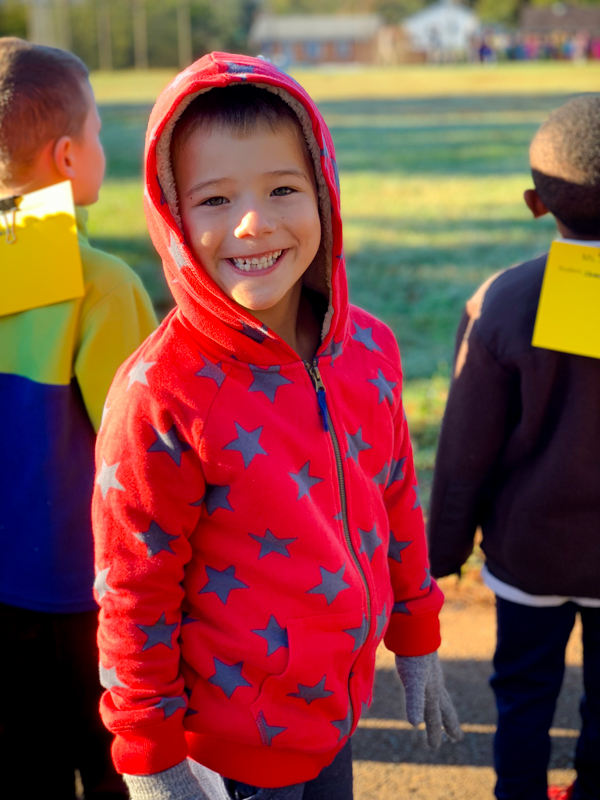 I am down to minimal exercise these days. I don’t want to over-do it just in case I do go into labor and need all of my energy stored up! I’m getting in a short walk each day and that’s about it. I will admit I see people out on these beautiful fall runs and can’t wait to be that active again, but I have a few months until I get to that point, at least.

Leftover pork + cheddar sandwich and apple for lunch. My taste for big salads is just not there right now, and half a sandwich hits the spot. 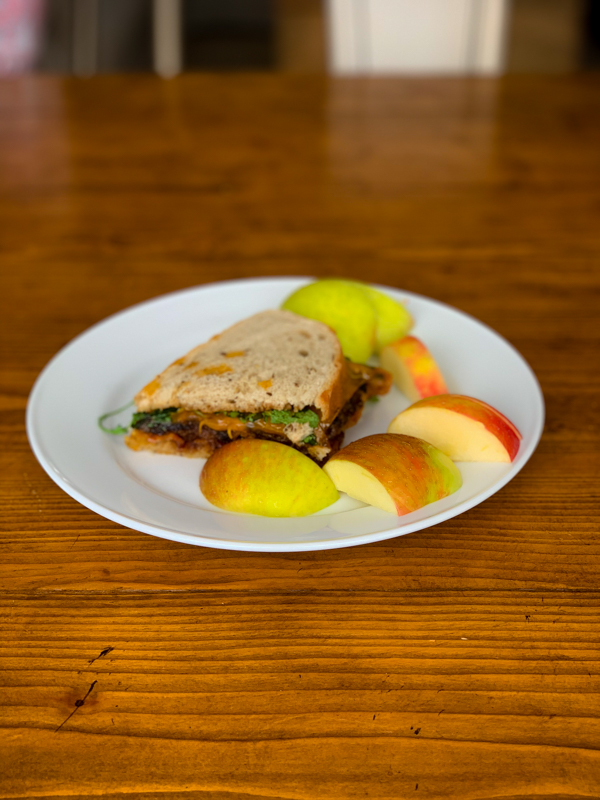 On Friday night we had pumpkin ravoili from Mona Lisa Pasta with butternut squash fall sauce I picked up from Trader Joe’s. Mazen was not happy about the green specks of kale I mixed in (even though he likes kale salad and kale chips) so that was an unfortunate battle. I refuse to make him a separate meal at age 6, so he was not happy. Just keeping it real! 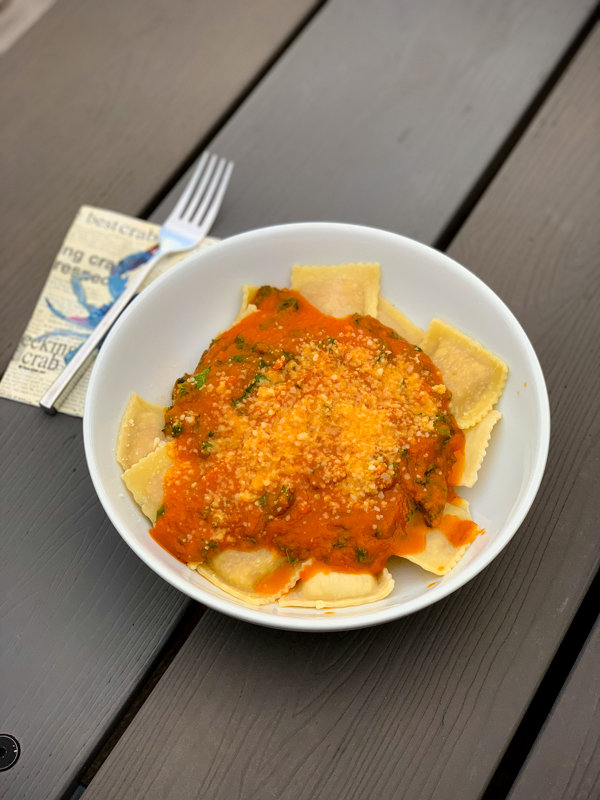 Friday night we watched the latest This Is Us and called it an early bedtime. I’m so ready for bed by 8:30 these days. As a result, I’ve been waking up between 5:30 and 6 too excited to go back to sleep! 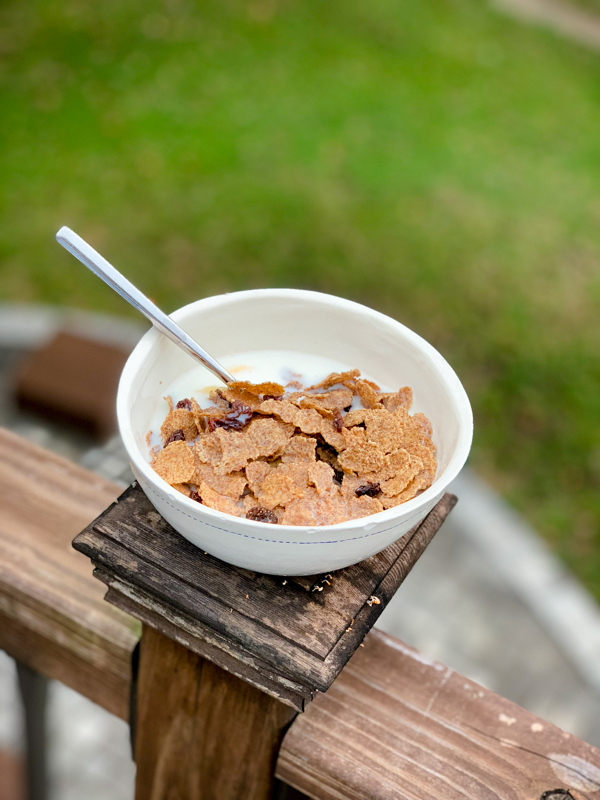 We took a short walk with Gus around the neighborhood. Mazen practiced being camouflaged the whole walk. Can you see him? 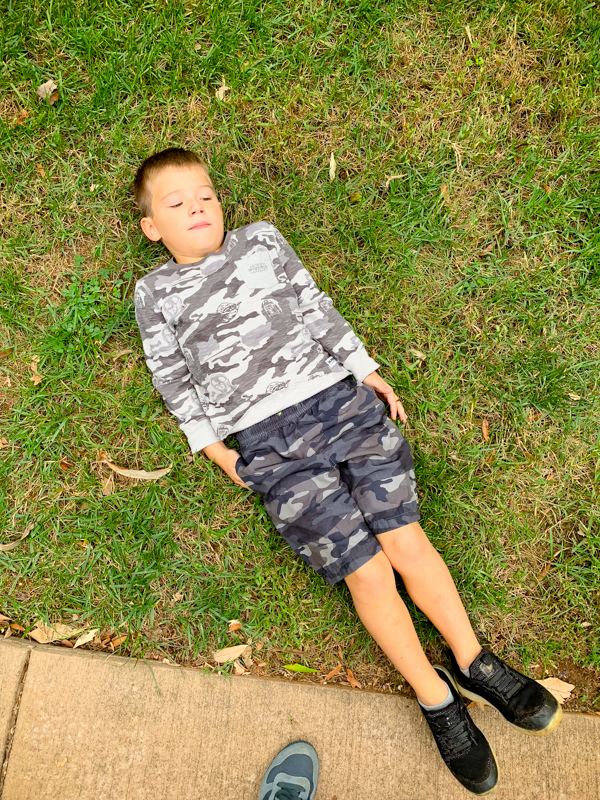 We built a Batman city before heading to his soccer game at 11. Go Green Dragons!! 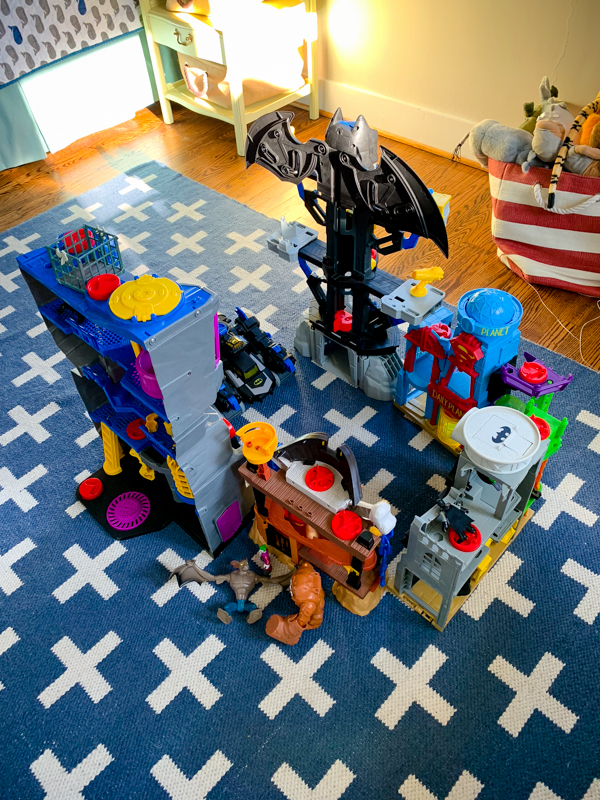 After the game, we went by Feast and picked up more sandwiches for lunch. Flying by the seat of our pants all weekend! I got a fall salad, which was heavier on the carrots than the greens, and we shared some chips. My sandwich was a peach, ham, and blue cheese panini and it was epic! I saved the other half for Sunday’s lunch. 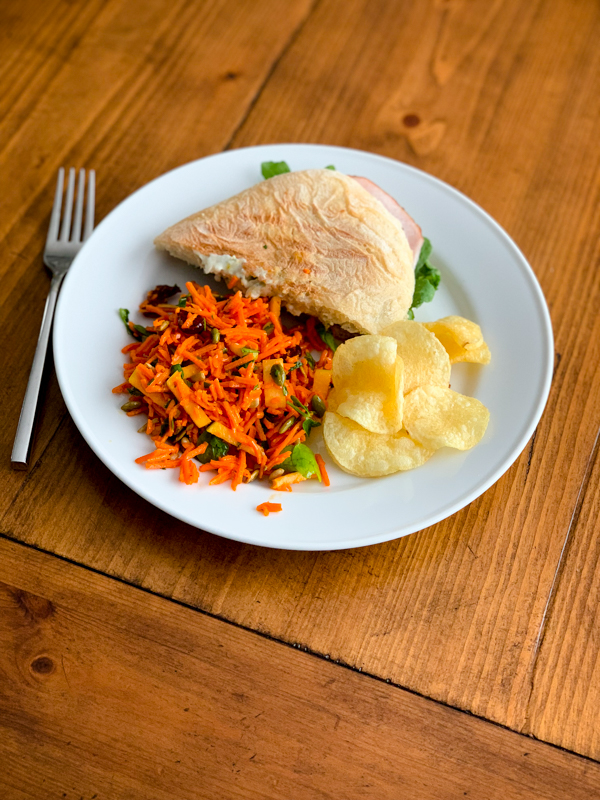 I spent the afternoon switching around Mazen’s wardrobe, weeding through the size 5 clothes and bringing out new cold weather things the grandmothers purchased on sale last spring. He has so many cute things for the chilly season! I actually think he has too many items, but because he splits time between two houses, we need to err on the ‘more’ side because just when I think he has too much Matt will tell me “I only have two shirts at my house” and it all shifts around! 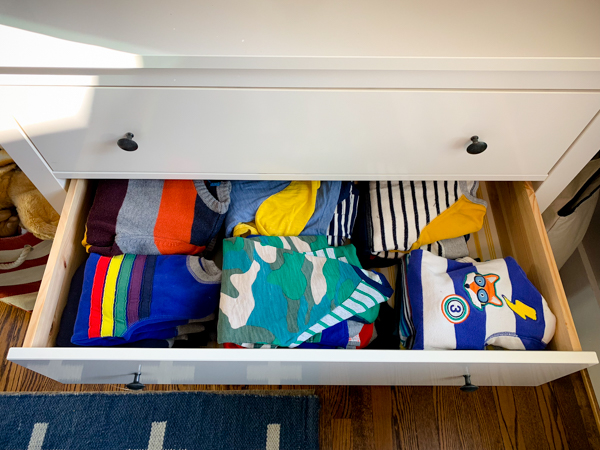 I squeezed in a 15 minute nap before Thomas and I headed to Alamo to see a 5:45 showing of A Star Is Born. We loved the movie, although it wasn’t what I was expecting plot wise. The acting and music were both fantastic! We shared two pizzas and a cookie milkshake for dessert and were happy to be home in bed by 9 : ) Wild Saturday night over here! 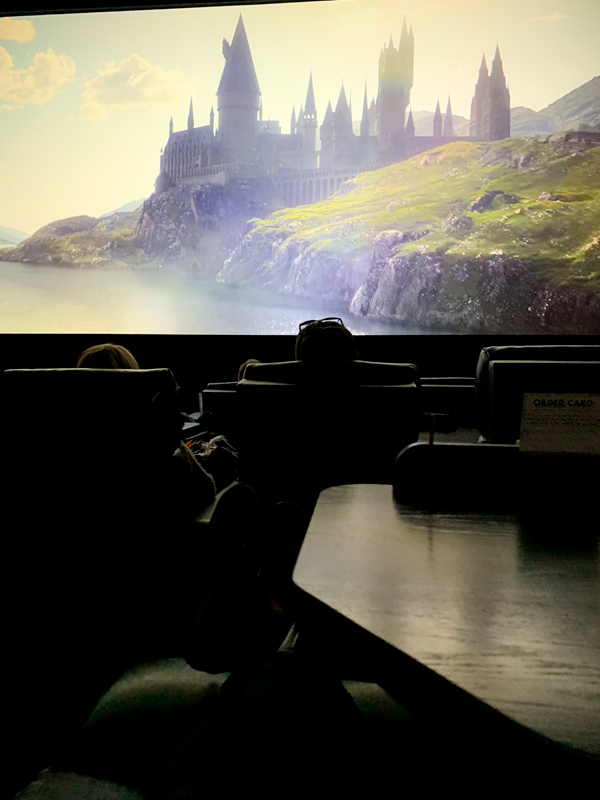 I thought I was waking up with mild cramps all night on Saturday, but I was in such a sleep haze it was hard to tell. Sometimes I think the baby’s position just puts a painful pressure on my pubic bone that feels like a cramp. I woke up pretty much every hour all night, but when I finally got up at 5:30 my body felt pretty normal (although very stiff, as usual!)

I made Cville Crunch bread french toast (with extra egg) and OJ for breakfast. Plus coffee before sunrise. 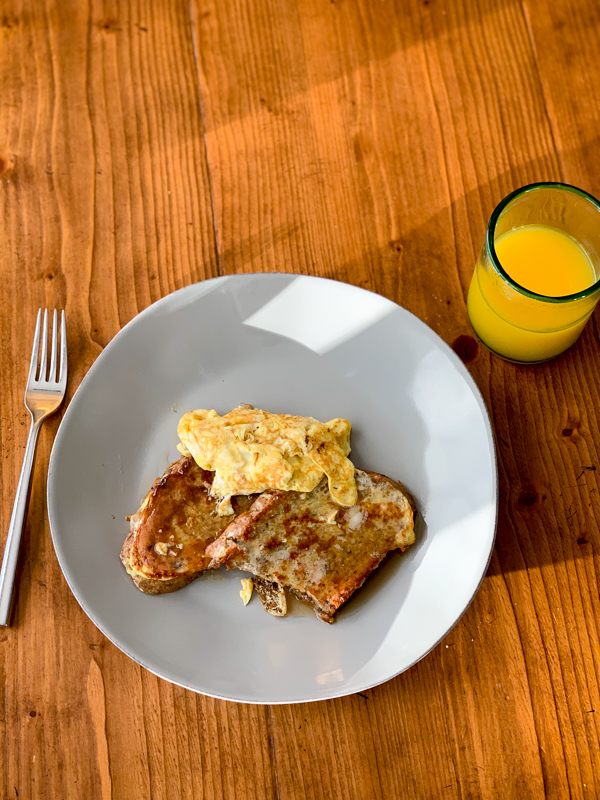 Thomas and I went for a 2.5 mile walk mid-day on Sunday and then we took Mazen to the UVA Women’s Soccer game! 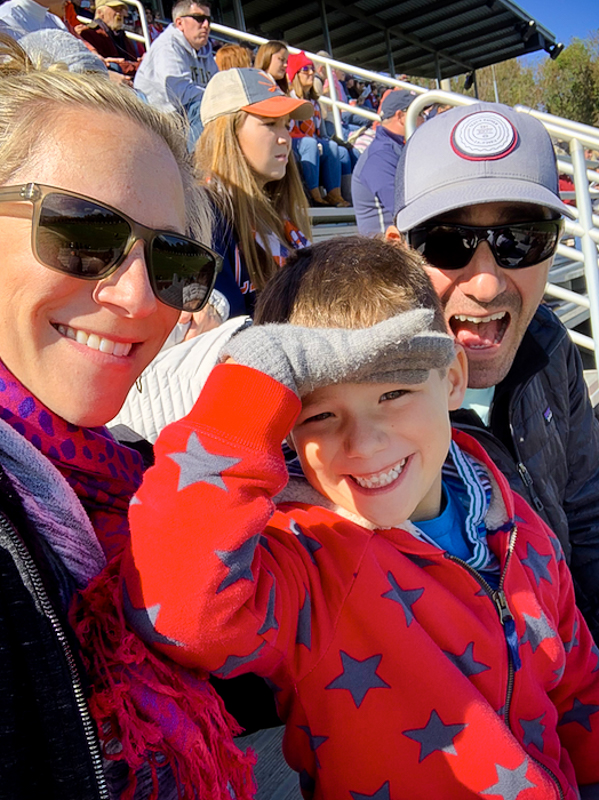 It was perfect fall weather for sports watching. We’re trying to get Mazey a little more excited about his soccer team, so this was an attempt at some inspiration. He seemed to enjoy it! 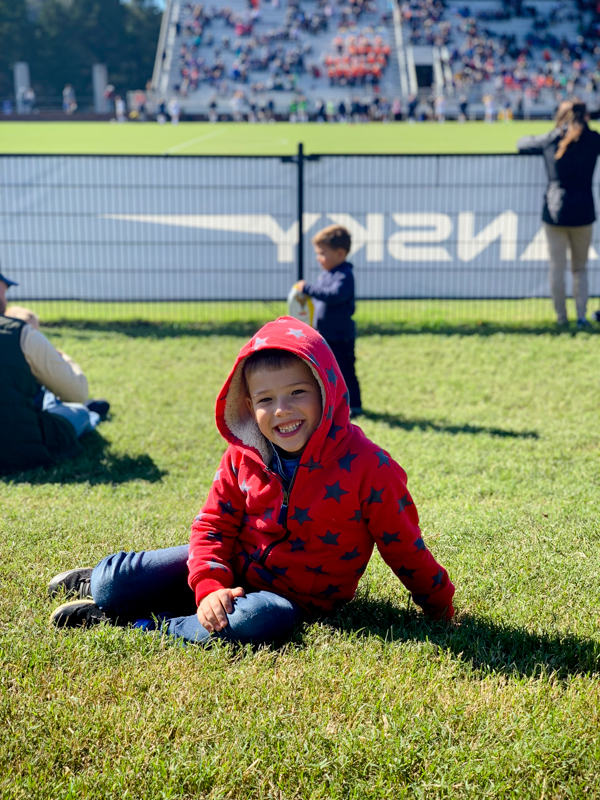 Afterwards we went by Barnes and Noble for a few soccer themed picture books : ) 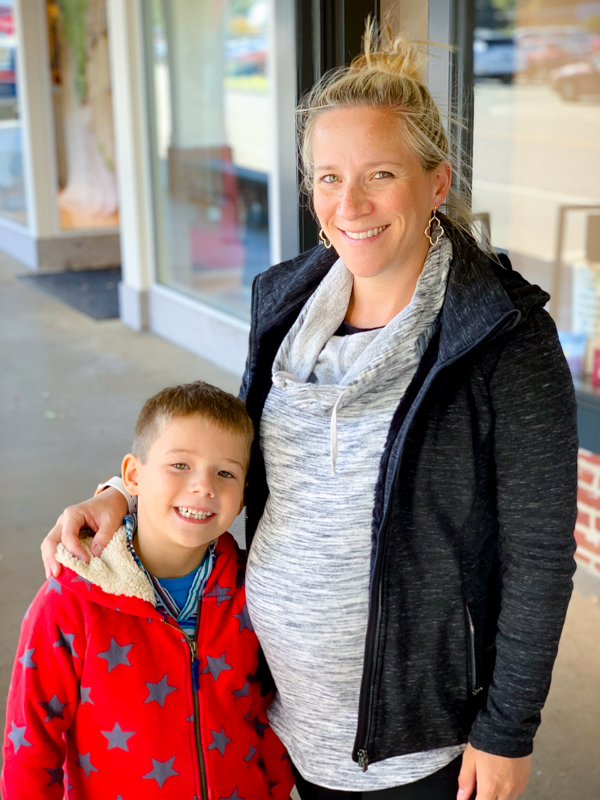 I was able to sneak in a nice nap, and greeted with Legos when I was awake again 🙂 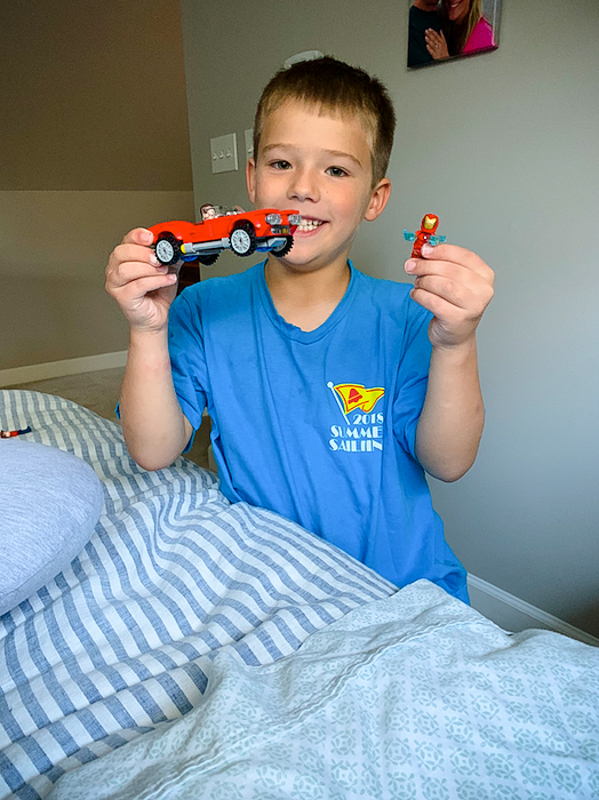 Thomas was on the grill all day. He made some homemade beef jerky, which turned out great, and we had these Bacon-Wrapped Jalapeno Stuffed Chicken Thighs for dinner! YUM! 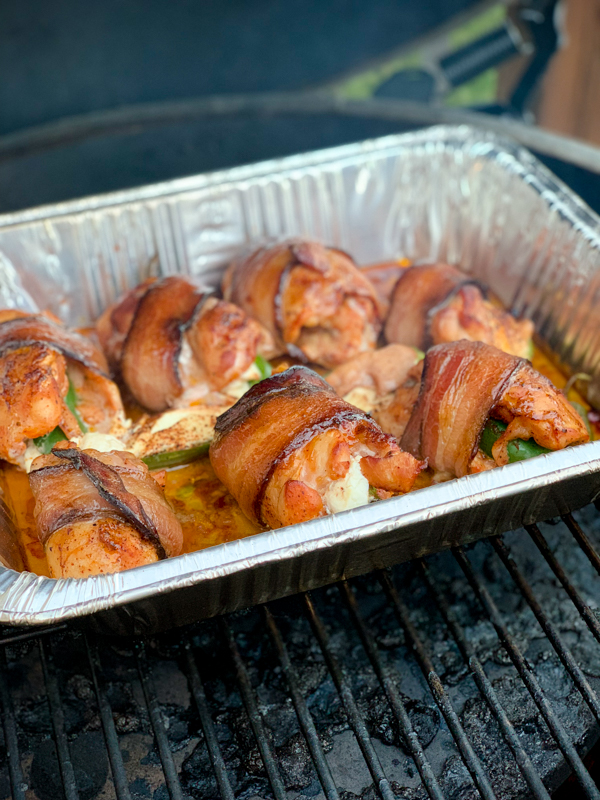 Having a stash of Butcherbox meat in the freezer has made Sunday Grill Days extra convenient as part of our weekly meal plan. We almost always have leftovers for Monday night too. The box lasted us the perfect amount of time, and I ordered another box to arrive next week. I really do think it’s a good deal especially given that everything is grass-fed and pasture raised. (They are doing a $25 off and free bacon promotion through Halloween.) 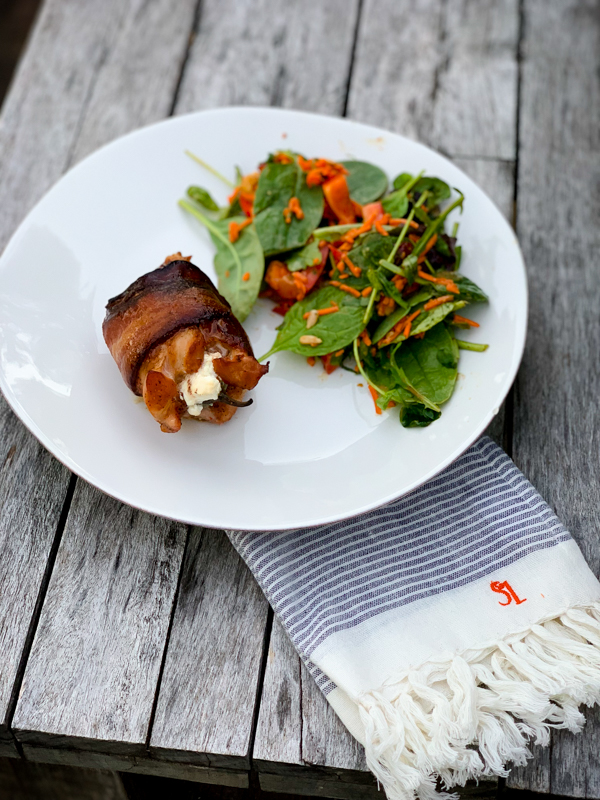 Here’s to hoping today is the day!