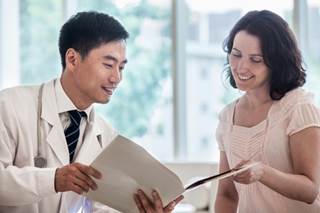 Talazoparib resulted in better patient-reported outcomes compared with chemotherapy among women with TNBC and BRCA mutations in the EMBRACA trial.

Talazoparib treatment resulted in better patient-reported outcomes (PROs) compared with physician’s choice chemotherapy (PCT) among patients with triple-negative breast cancer (TNBC) and germline BRCA mutations, according to a subgroup analysis of the EMBRACA trial presented at the ESMO 2018 Congress in Munich, Germany.1

EMBRACA was an open-label, phase 3 trial that demonstrated that talazoparib prolonged progression-free survival compared with PCT (hazard ratio [HR], 0.60; 95% CI, 0.41-0.87; P= .008) among patients with TNBC who harbored a BRCA mutation. This post hoc analysis evaluated the PROs during the trial.

Patients reported their outcomes on day 1 of each treatment cycle, which was considered baseline, and also at the end of treatment by way of the EORTC QLQ-C30 and breast cancer module, QLQ-BR23 questionnaires. Baseline PRO scores were similar between the groups.

There was also a substantial improvement with talazoparib compared with PCT in the overall change from baseline for fatigue, pain, appetite loss, and breast and arm symptoms.

There was no significant difference between the talazoparib and PCT arms for emotional and cognitive function, nausea and vomiting, dyspnea, insomnia, constipation, diarrhea, emotions related to hair loss, or sexual enjoyment/functioning.

According to the authors, the study results suggested that “talazoparib resulted in significantly greater improvement from baseline and delayed time to deterioration in GHS/QoL and pain symptoms versus PCT.”

Disclosure: This study was funded by Pfizer, Inc. For a full list of disclosures, please refer to the study abstract.

Read more of Cancer Therapy Advisor‘s coverage of the ESMO 2018 meeting by visiting the conference page.